Serving the Walak in Papua

“Wa, wa, wa, wa…” The sound echoed inside the ‘honai’ (a traditional grass-thatched roof house) where we were seated. It was the sound of grateful thanks from the Walak leaders. We had just arrived in the village for the first time in 2005 and visited the honai of the village chief. ‘Wa’ means ‘thank you’ in Walak and the depth of gratitude is reflected in the number of times the word “wa” is repeated. This usually happens after their traditional welcome, a “de ndai” (crying song). In this traditional Walak welcome, a leader leads the people in the song of gratitude to God for the visitors. The rest of the villagers who are present, responds in unison at the appropriate time. Real tears flow from their eyes during the ‘de ndai’. Wet drippy noses which they wipe with their hands…only to shake yours right after! The Walak people live in the central highlands of Papua, Indonesia. With around 3,000-5,000 speakers, this tribe considers themselves one of the smaller groups in Papua compared to neighbouring tribes. While until the present, we have experienced gradual changes in technology until the present, the Walak (like many other tribes in the remote parts of Papua) have lived unchanged lives since time immemorial.

The Walak practise subsistence agriculture - consuming most of the produce they grow: leaving little or nothing to be marketed. Now, with the digital age at their doorstep, they have to make a leap from the “stone age to the information age”. The Walak are keenly aware of the challenges in preserving and passing on their traditions to the next generation.

The Walak language is a branch of the Western Dani language which is part of the Trans-New Guinea language family. The Walak people have been living in the central highlands of Papua, spreading from the lowlands of the Pyramid area to the Central Memberamo highlands. Just over 50 years ago, the Dani was first among the larger tribes to receive the gospel. The Scriptures were first translated into Dani and an indigenous bible school was formed to teach the people about God and His Word. Many new believers became local missionaries and began sharing the Good News to neighbouring tribes. Although the Walak is linguistically part of the Dani, the tribal system they lived in, puts them at odds with each other.

In the village of Danama, the ‘ap nggok’ (big man) aka the village chief, Tenggino, was a fierce warrior chief. He defended his village from the advancement of the Gospel and rejected the message the Dani missionaries brought. As inter-tribal tensions were often high in Papua (due to self preservation, distrust, revenge killings, etc.), there were accounts of Dani preachers being killed because Tenggino did not trust these foreign preachers. However, the Lord moved his heart and the whole village came to believe in the true living God. In the late 1960s, missionaries were sent to establish churches in the Walak area. They learned the language, lived among the people and helped them grow in their newfound faith. By the time most missionaries left in 1977 due to political unrest, churches were established but the translation of the Scriptures into Walak had not started. However, as the Western Dani had a larger population, there was a push by missionaries to translate the Bible into Dani and this was completed in 1980. To use it, the Walak pastors had to read it in Dani, translate it in their heads and then speak in Walak. While this worked somewhat, some Dani words were confusing as the language was distinct from Walak. The attempt to translate the Scriptures into Walak for over 10 years failed.

In 2004, we moved our whole family to Papua, Indonesia. We found a local organisation who was willing to sponsor us (i.e. that we are accountable to) so, under this organisation, Angie would translate the Word of God and Peter would be involved in literacy and engaging people with Scriptures. Case studies have shown for tribal monolingual situations, learning to read and write is best done in the mother tongue. It is also harder for a tribal people group to identify with Scripture when it is presented in a foreign language. We needed to hear from the Walak people themselves if there was a need for Scripture in their language. So, Peter and Angie made plans to learn Walak in town in preparation for trips into the Walak territory. During the few visits to the village in 2005, we learnt about the Walak and their heart cry for the scriptures in their language. One day, Tenggino came by to visit. We talked about his life and his family and after a while he talked about his heart’s desire, “I took literacy lessons to read the Bible. I have finished the course already but where is the Walak Bible?” We could see tears in his eyes. “I am getting old and my eyes are getting weaker. We have been waiting for so long - will I ever be able to read the Walak Bible?” Our hearts were touched by his desire for the Scriptures and we saw that the people wanted the Scriptures in their language and we promised to do our best to see it come true. During one of the district meetings, the Walak decided to give the responsibility of Bible translation to us. 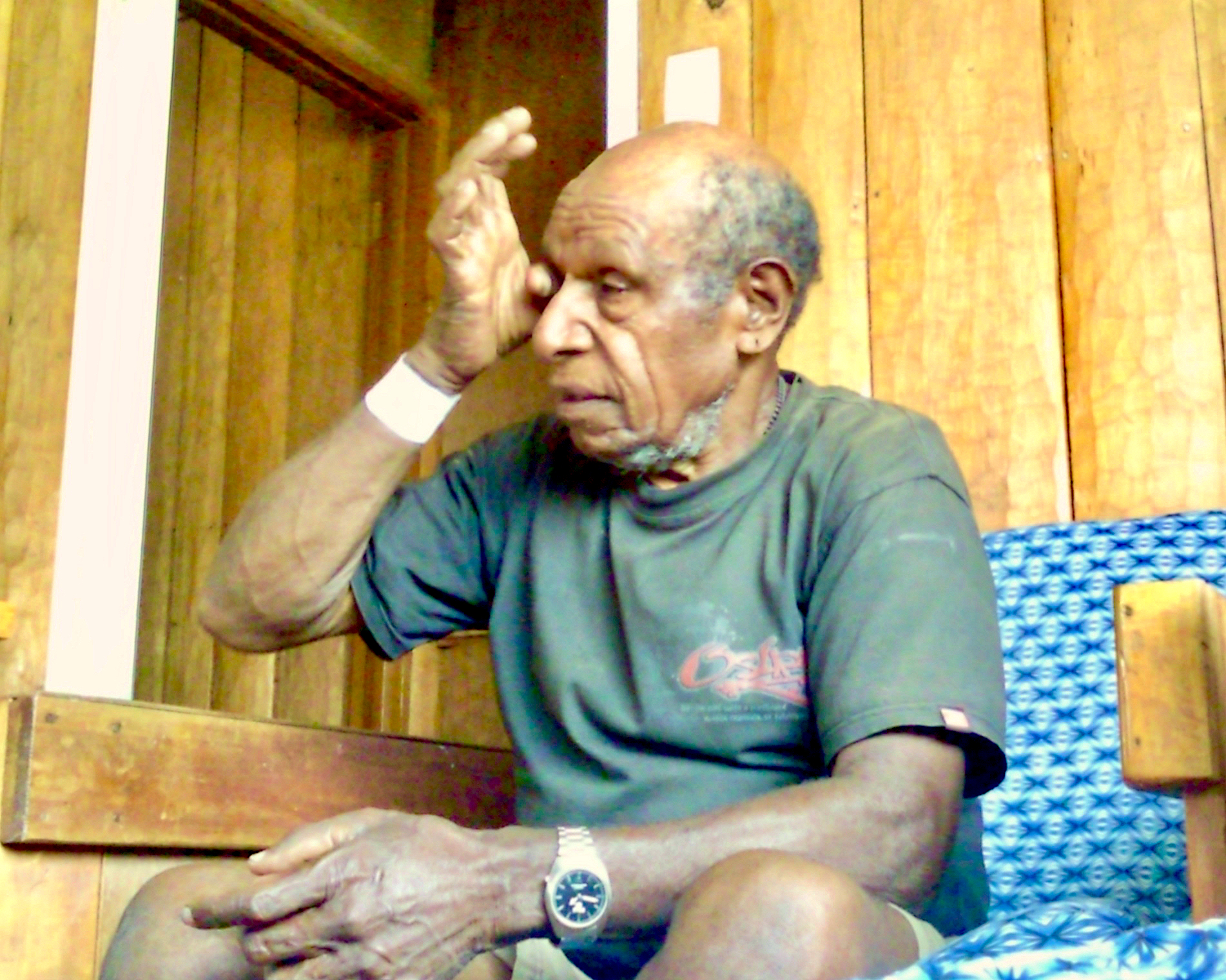 “I am getting old and my eyes are getting weaker. We have been waiting for so long - will I ever be able to read the Walak bible?”

After a year’s wait for our work visa, we managed to get back into the country with Peter working as a teacher in the mission school for 2 years. Although we couldn’t officially work with the Walak, we kept in contact with them during the following 2 years. In 2009, the Lord opened the door for us to be sponsored under GIDI (Gereja Injili Di Indonesia), the Evangelical Church in Indonesia. Working under GIDI, there has been great traction regarding Bible translation and progress in getting the Word of God to the Walak has gained great traction. Peter connected with 2 faithful Walak speakers who are committed to Bible translation - Sonny and Wempy. They are both married and have kids and have pledged their time and energy into getting Scripture and related materials translated into Walak. Since the work of the written Bible translation had already being claimed, we decided to focus on an oral approach instead. Working with Peter, Sonny has formed a Walak team for the OneStory program. This program consists of 6 language groups, meeting 4 times a year, a month at a time with the goal of translating a set of 18-25 Bible stories from Genesis to Revelation into their own languages. There has been great success working this way as they see similar challenges in the other language groups and are able to pray and encourage one another.

In 2017, Sonny and the team took the stories they had worked on and shared them with the Walak people. They shared the story of creation in Walak and taught the people to retell and memorise it. A man named bapak Endatekma attended and his life was changed. Before he joined the group, he saw no difference between worshipping God and worshipping Satan. Instead of going to church on Sundays, he would go to a cave, start a fire and worshipped evil spirits. However, when he joined the storying sessions, he learnt that when Adam and Eve sinned, God cared for them and clothed them, to cover their nakedness. He still showed His love to them. In the same way, Endatekma felt God’s forgiveness and acceptance. The Lord convicted him that what he was doing was wrong and God’s grace was calling him to repentance. In the end, he concluded that only God is good. He is now following Christ and is part of the Church leadership.

Angie who was trained as a Bible Translator is now a Bible Translation consultant. She has been approved to check the quality of Bible translation work and has helped many language groups in Papua get their Scripture portions checked and approved to be used/published. She is currently working with a group which is exploring an oral Bible Translation approach. We believe this is a good way for the languages in Papua to get access to the Word. Apart from this, Peter and Angie have been working on a set of four Bible background books in preparation for the Old Testament translation (if the Lord wills). With book 1 completed, book 2 in final draft and Book 3 in initial draft, we hope to complete the set of 4 books within the next year, The Walak people also wish to have the Jesus film translated and dubbed into their language, the work of which will hopefully start by 2020.

* If you wish to contact Peter and Angie, please write us at peter-angie_seow@wycliffe.my to receive regular email updates, or sms at WhatsApp at +62812-4811348.